Lucy Moore laments the decline of the Jelly-house, erstwhile institutions of all things wobbly

A 1771 guide to Covent Garden promised to take its readers on a tour of ‘the theatres, Jelly-houses, Gaming-houses, Night-houses, Cottages, Masquerades, Mock-Masquerades, Public-gardens, and other places of entertainments’ for which the area was famous. Nearly all of these can still be found here… ‘Cottages’ are public lavatories, ‘Masquerades’ are still popular around Hallowe’en, and several delightful ‘Public-gardens’ remain open for drinks and dinner around the piazza – but alas the ‘Jelly-house’ has fallen out of fashion.

Jellies were trophy foods in the eighteenth century. They were tricky to create, requiring expensive, recherché ingredients and a serious armoury in the kitchen, as well as an experienced chef. But they were highly nutritious and, when well made, real show-stoppers: gleaming, fantastical confections in a rainbow of jewel colours that would dazzle the eyes and astonish the mind as well as tickle the taste buds and fill the tummy. They might be amusing – anyone for pineapples, bacon and eggs or playing cards made of jelly? – or impressive, as with the jellies shaped like castles and wild animals on show at Henry VIII’s banquets.

Today we have jelly or trifle, neither particularly exciting, but centuries ago the jelly-lovers of Covent Garden feasted on ‘quiddanies’ (quince jelly), ‘flummeries’ (oatmeal cream), ‘jaune mange’ (as the name suggests, a yellow version of blancmange), ‘marmalades’ (the fore-runners of modern marmalade, these were a sweetmeat eaten in slices rather than on toast) and ‘ribbon jellies’, set in glasses in stripes and eaten at parties. The most special jellies were made in moulds shaped liked bunches of flowers or lofty obelisks and pyramids, the taller the better, sometimes with cream piped down into them in spirals to create even more elaborate decoration. Others might be leafed with gold, cut into chequer-boards, or made into clear domes with perfect fish, fruit or flowers apparently floating inside them.

Perhaps one of the reasons they’ve fallen out of fashion is their ingredients. The seventeenth-century matron Ann Fanshawe, whose recipe book inspired my latest book, Lady Fanshawe’s Receipt Book, records ‘a very good way to make jelly’ which, though it contains lots of sugar and masses of delicious spices including ginger and cinnamon, was largely made of veal’s knuckle, calf’s foot and beaten egg white along with hartshorn – literally powdered hart’s horn (or sometimes decomposed urine) which was used before baking soda was invented. (Hartshorn, because of its associations with stags and rutting, was seen as an aphrodisiac and, with its powerful odour of ammonia, it was also used in smelling salts.)

In fact, most savoury jellies were and are just cooled cooking juices or meat stock, which jellifies naturally and is rich in protein and minerals, as well as preserving whatever is contained within it. They made you feel good, hence why jelly-houses were a particular feature of Covent Garden nightlife – stimulating good health and virility, jelly was the perfect prelude to a tour of the area’s ‘Night-houses’…

For those who find the idea of hoof-based gelatine simply unpalatable, perhaps Ann’s recipe for ‘red marmalade of quinces with jelly betwixt’ sounds more tempting? 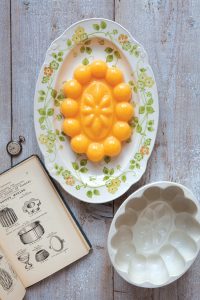 The History of British Puddings, Savoury and Sweet, introduces us to a dish with a long history

Blanc mange is a dish fit for kings when made well and moulded into impressive shapes or scooped into dainty jelly glasses. In the past, it was exclusive to the upper classes, who would have been the main frequenters of the beautiful jelly-houses of Covent Garden.

Blanc mange is mentioned in the prologue to Geoffrey Chaucer’s Canterbury Tales (1475) and it is one of the most international early dishes of European cuisine. From the Middle Ages onwards the name of this dish in its various forms – blancmange, blanc manger, blamange, manjar branco, biancomangiare – can be found in most European cookery books.

Strangely enough, despite its French name, it hasn’t been spotted in French recipe collections. The name literally means ‘white food’ because it is made with white ingredients, the earliest being chicken or fish along with rice and almonds. A blancmange that was made by adding egg yolks to the mixture, along with white wine and the juice of Seville oranges, first appeared in the eighteenth century under the name ‘jaune mange’ (lit. ‘yellow food’).

Because the eggs give this jaune mange a set already, you don’t need to use as much gelatine as you would for a blanc mange.

• In a small saucepan, bring the wine and sugar to a simmer. In a separate bowl, whisk the egg yolks. Soak the gelatine leaves in the orange juice until soft.

• Begin whisking the warm wine mixture into the egg yolks, followed by the soaked gelatine and juice.

• Allow to cool but not set, then pour into the mould and allow to set for 6 hours or overnight. The smaller the mould, the shorter the setting time.

• To unmould, wet one of your hands and use it to loosen the jelly. Allow the jelly to slide out onto a wet plate (if the plate is wet, you can easily move the jelly around if necessary).