THE MAGIC OF MAIDEN LANE

THE MAGIC OF MAIDEN LANE

Maiden Lane is one of my favourite places in Covent Garden and not just because I’ve called this Lane home for 11 years. The amount of characters that have walked up and down, lived and dinned here is mind boggling.

J.M.W Turner (the most famous landscape painter) was born in 1775 on the now premises of The Porterhouse Bar, Charles Dickens would walk up and down Maiden Lane wishing he could eat inside Rules Restaurant (the oldest in the world and unfortunately will remain closed until September.) French  philosopher and playwright Voltaire lived here between 1727-1728 and poor William Terriss one the most famous Victorian actors of his time was stabbed to death outside the stage door of the Adelphi Theatre, his ghost is said to STILL haunt the building. Maiden Lane is currently home to the award winning QI Team which include The Elves and founder John Lloyd OBE (who kindly wrote for us a few issues back), and last year Rock legend Roger Taylor of ‘Queen’ fame pulled the cord on a brand new plaque for Maiden Lane, celebrating The Gramophone Company set up in 1898 on behalf of Emil Berliner. One of the early recording companies for the parent organisation, His Master’s Voice (HMV) label. 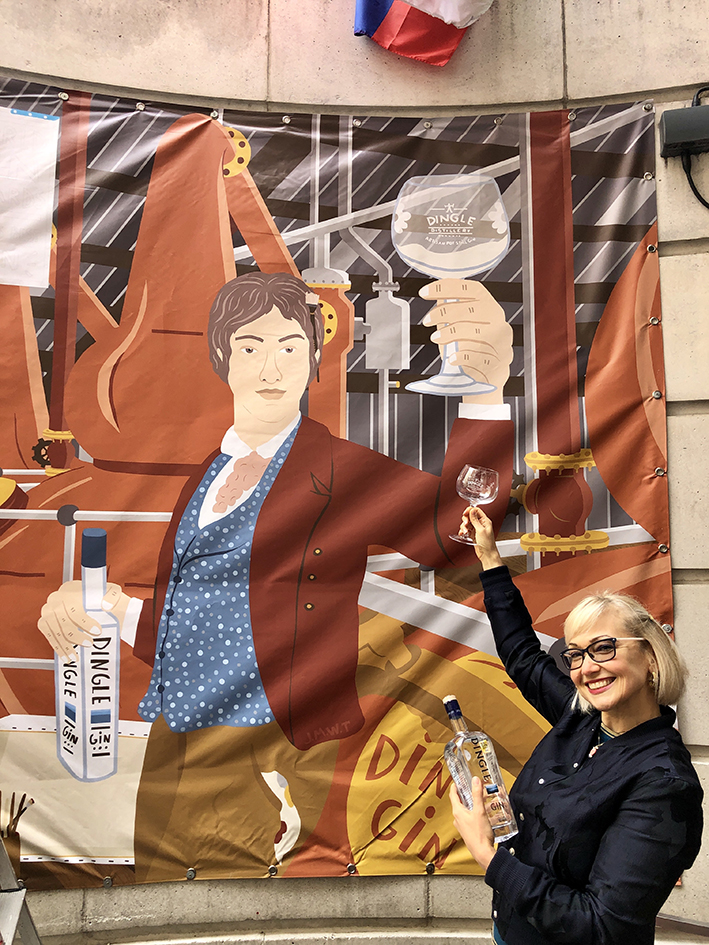 The first port of call is a Dingle Gin on the Terrace of The Porterhouse Bar who were awarded World’s Best Gin at the World Gin Awards in 2019. We celebrated this accolade in style last year by inviting French artist and friend Emma Verdet to create a new piece of art depicting J.M.W Turner (who was born on the premises of The Porterhouse in 1775) toasting us with a glass of Dingle Gin. The next stop would be to have a glass of wine at the Lady of the Grapes. Right next door is the super cute tapas bar Condesa, stop for a nibble there and head towards Sticks’n’Sushi for dinner, the hamachi kama is a favourite, (needs to be booked in though). If you’re after something a bit more cheesy, Franco Manca has just reopened, their pizza is the best in Covent Garden. After dinner pop into the Maple Leaf Sports Bar for an ice cold Canadian Beer. An alternative to the Maple Leaf is Moto, the only Japanese Sake bar in London (opposite Sticks’n’Sushi) and Ping Pong right at the start of Maiden Lane also have an interesting collection of cocktails, we suggest the Lychee and Roses, (one of their signature drinks) made with bombay sapphire gin, rose petals, lemon and lychee juice.

Don’t be shy if you’re coming to Maiden Lane drop me a line, you never know, might join you… especially as there’s the ‘Eat Out to Dine Out £10 off’ promoting happening at most of the restaurants mentioned above.