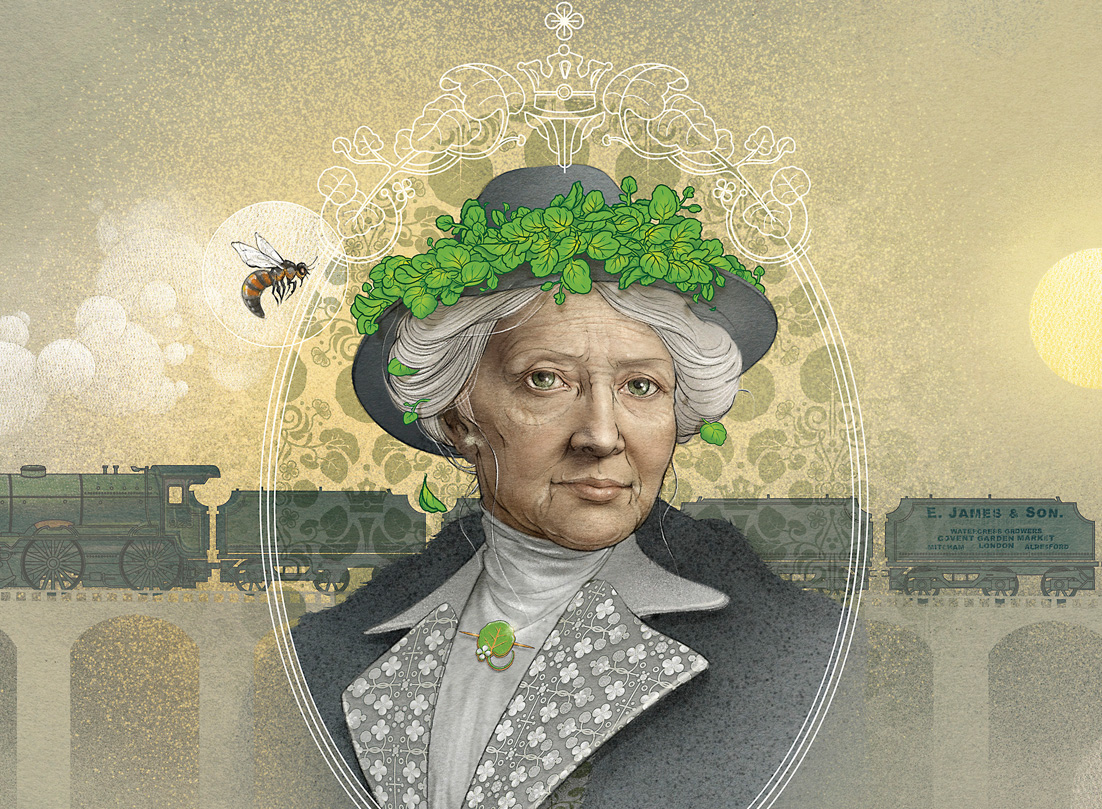 Eliza. Listen closely and you might hear the name of an uncrowned queen of yesteryear echoing around the majestic walls of Covent Garden Market. Eliza James, the ‘Watercress Queen’.

Surely one of Covent Garden’s greatest success stories, this was a woman who scaled the social ladder of nineteenth-century London. From the early age of five, little Eliza walked the streets of industrial Birmingham with basketfuls of bunched watercress, so-called ‘poor man’s bread’, going from factory to factory to sell her nutritious greenery to the workers. In around 1877, dreaming of a better life, she moved to London.

Days started early for watercress-sellers like Eliza. Usually female, they were either very young girls barely out of their infant clothes, or elderly women desperate to earn enough for a crust of bread and a place to sleep. Conditions were harsh and reports from the time mention that many of the children went barefoot and were starving. Their trading cries were the first to be heard at dawn, early enough to catch the morning rush hour. Workers would eat the bunches of cress on the go, very much like we grab a bacon butty and sip our lattes on the way to the office today. Watercress, which contains more vitamin C than an orange, not to mention numerous other health benefits, kept ordinary Londoners going, providing a welcome hit of green in an otherwise monotonous diet.

Watercress – however hard to believe given its relatively humble status in today’s salad world – became big business in London following the opening of the Mid-Hampshire Railway in 1865, which connected the rolling watercress beds of Hampshire to the market stalls of London. The pungent mustardy leaves of the brassica family could reach the city long before they started to wilt. The better the quality, the bigger the profit. Henry Mayhew, the journalist behind the 1851 report London Labour and the London Poor, noted in his interviews with London’s street-sellers that 1,578,000 bunches of watercress a year were sold in Covent Garden alone, and that it was here that the best quality bunches could be found. Most of the watercress was collected by the Covent Garden sellers before the crack of dawn from Farringdon market, where wholesalers could be ruthless in their pricing, meaning some days the poor children selling it on elsewhere struggled to turn a profit at all.

Eliza, however, had an entrepreneurial spirit and diversified her business, plying her trade not only at the market, but also to restaurants, stores and hotels. Soon she gained a near monopoly over London’s watercress trade. She founded her company James & Son and invested wisely in her own watercress beds all over Hampshire and Surrey, growing her business to become the largest watercress company in Europe and maybe even the world. But for 50 years she kept opening her stall at Covent Garden Market early each morning, arriving on the back of the watercress cart driven by her son-in-law. Eliza’s Hampshire farms are producing watercress to this day and are still part of the company she originally founded.

At her funeral in 1927, there were 200 floral tributes, from big West End stores to the humblest costermonger. On her death, the Daily Mirror reported: “For a woman by her own unaided efforts to have amassed £20,000 [£3.5 million today] three or four times over by selling watercress is surely one of the most wonderful romances of business London has ever known.” 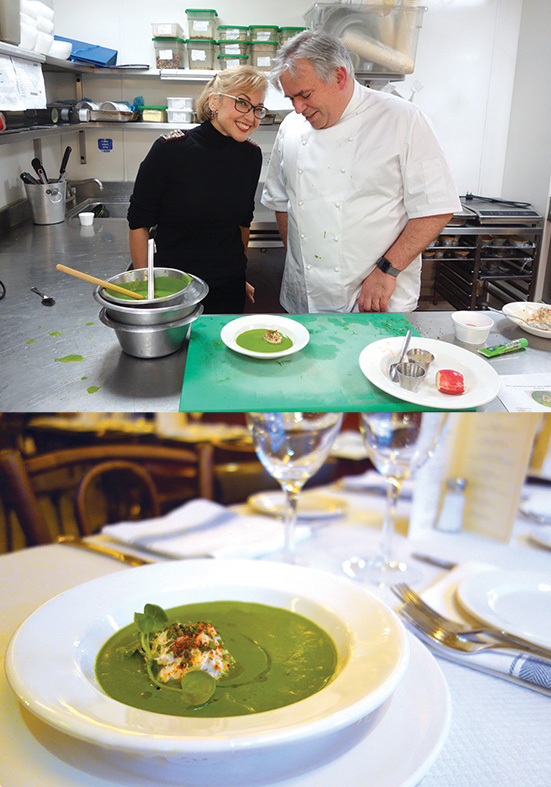 To celebrate out spring issue and our cover girl, Eliza James, The Watercress Queen of Covent Garden, we met up with Robert Reid, Executive Chef at Balthazar. Robert has created for us our very own tribute to Eliza… a delicious and very healthy watercress gazpacho. Having worked in Michelin restaurants all over the world, Mr Reid was delighted to share his love of the powers of British watercress. We didn’t stop laughing as we whizzed up this soup.

For the watercress Gazpacho

Add all the ingredients to a high speed blender until thoroughly mixed, add the grapeseed oil to emulsify at the end.

This dish can be enjoyed on its own, or is complemented beautifully by either parmesan shortbread or croutons.